stand at the crossroads and look; ask for the ancient paths, ask where the good way is, and walk in it, and you will find rest for your souls

Marina turns two today which, among other things, serves as the proverbial, cliched reminder that time does, indeed fly. Today I hit pause for a moment to reflect on two years of parenthood.

The first thing I would like say by way of observation is that nothing has been more disruptive to my life than becoming a parent. College was a time of transitioning and developing. Post-college brought new adulty realities into my life. Moving to Colorado to plant a church required a different level of growing up. And then marriage and moving to Boston accelerated the maturity process in all kinds of new ways.

But, nothing has been more disruptive than fatherhood.

The second thing I want to say is that this disruption has proven to be one of the greatest gifts I’ve ever received.

I say this because parenting has challenged me, has stretched me, has disrupted my selfishness and self-centeredness like nothing else. Nothing has revealed the dark parts of my soul quite as brightly as parenting.

I used to roll my eyes when my dad would say things to this effect. And certainly, I know many single people (or non-parents) who are incredibly mature and are light-years ahead of me in terms of character development.

I also want to say that I know many people who for whatever reasons are unable to have kids. Having experienced some challenges with fertility ourselves, I can also say that that challenge is every bit as forming as having kids. Maybe more so.

But, for me, and for many people I’ve talked to and pestered with questions, I understand like never before how important parenting is to becoming a mature adult with a character that has been tested and refined in the crucible of poop and fatigue and disciplining and trying to reason with a tiny, emotional human being.

God, I believe, gives us children to make us more like him.

Now, I know also know many people who had poor parental examples. I know and have heard so many stories of parenting done poorly. I know that simply reproducing doesn’t make you a better person.

But it does reveal what’s there unlike anything else. Some people look at what is revealed and choose to ignore it, run away from it, or deny it.

But if the revelation is embraced it can bring transformation. This I have also seen personally and in the lives of countless friends and family who have become incredibly beautiful people through embracing the challenges of parenting.

The last thing I would like to say, is that beyond life lessons and maturing, I am simply grateful for Marina. At two years old she is already a remarkable person, and we love discovering more about her all the time.

Happy Birthday, Kiddo! We love you! 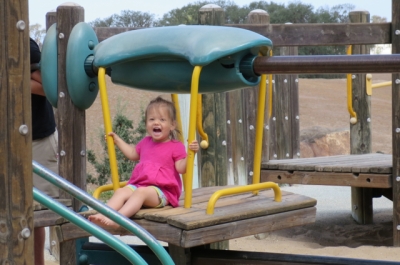